Our inspiration comes from South Sudan. Sesame seeds are a major agriculture product of the country. However, South Sudan lacks the ability to produce sesame oil on an industrial scale. This trend holds true (to varying degrees) for many sesame producing regions in the world. Therefore, we hope to design a large sesame oil production plant and explore its economic feasibility.
The figure below shows the world’s leading producer of sesame oil. 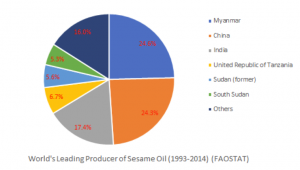 However, an oil mill requires a much greater capital cost, making it advantageous only with economy of scale. We will determine whether our design is favorable compared to the mechanical alternatives.

Sesame seeds are first roasted and broken. At this stage a portion of the oil can be harvested via a settling tank. The remaining solid is leached by a non-polar solvent (usually n-hexane). Oil (also non-polar) almost completely dissolves in the solvent, leaving protein, carbohydrates behind. Then the liquid and solid phase are separated via a settling tank. The solid waste is rich in protein and can be used as animal feed. The liquid phase is pumped to a distillation column. Oil is obtained by evaporating the solvent (lower boiling point). Solvent is recycled back to the leaching tank. 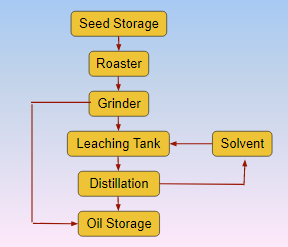 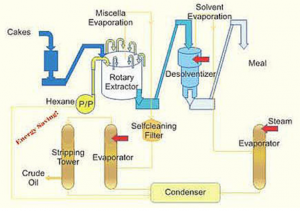