We went to the Deutsches Technikmuseum as a group, and we enjoyed our time there! On the top floor there was a plane suspended from the outside of the building. They had both life-size and scale models of various boats, an exhibit on energy, a flight simulator, and many other cool exhibits. 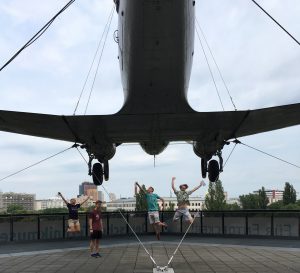 In Koblenz, we went to the Deutsches Eck. Translated as “German Corner,” this is where the Rhine and the Mosel rivers intersect. I was amazed at how dirty the Rhine looked compared the Mosel. There was a beautiful view of the city from just beneath the statue in the picture. 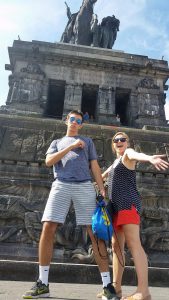 In Heidelberg, we got a tour of the Heidelberg castle. Outside the castle itself, there was an overlook with a great view of the city. The town of Heidelberg is beautiful, especially with the red roofs in the city below the castle. It is rumored that in World War II, the Americans said they did not bomb Heidelberg because they wanted to live in it after the war. True or not, the view from up there was wonderful! 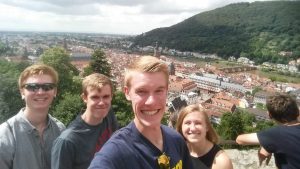 In Berlin, we often get ice cream after dinner. We tried a few different places, and finally decided on this one since it is only 1.10€ for a scoop. All the ice cream is delicious-a little creamier than in the states (more like gelato). There are also a different variety of flavors. For example, I tried Tiramisu ice cream and it was amazing! 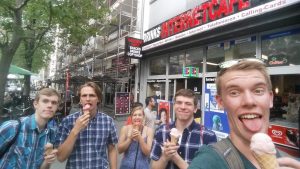 Near the Technische Universität Berlin where we take our engineering class, there is a car storage and workshop called Classic Remise. Professors DeRooy and Nielsen recommended a visit, and we were glad we took their advice. It is full of really expensive cars from companies such as Lamborghini, Bugatti, Porsche, etc. Since my favorite color is purple, I found a purple Lamborghini Diablo. It was crazy to see many expensive cars all in one place, and we enjoyed look through the collection. 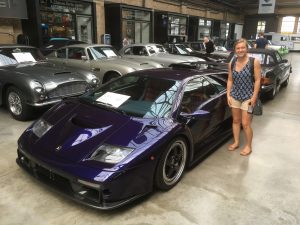 All in all, we are having lots of fun in between the hours of class and homework. Berlin is a great city to explore, and Germany in general is rich with beauty and history.