On a typical Sunday morning, I am at church by 8 AM. I do not groan or complain because I have to get up early, but I get to church ready to worship God in a similar way to how it would have been done after the Reformation in 1517 even though we have an organ, microphones, and the like today. It has been 500 years since Martin Luther nailed the 95 Theses to the door of the Schloss Kirche and today I worshipped at that church. 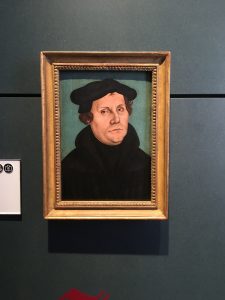 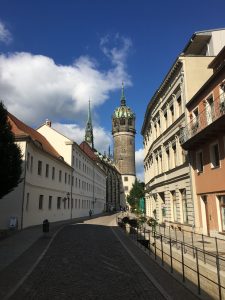 The church itself was very nicely painted, and it was fresh for the travelers who ventured to see it. Some people were in the church to sightsee, though for me it was a chance to worship where the beginning of Lutheranism happened. God called Luther to change the church because things were not right with the church. The 95 Theses pointed these issues out, and the one concerning indulgences is the most famous. For Luther, having studied the Bible thoroughly, the selling of indulgences stepped in the way of the true saving light of Jesus. He saw that faith alone was the way to God not indulgences. That was an important moment for God’s church on earth. The work that happened in Wittenberg was extraordinary. I was able to connect my Lutheran faith at home with the faith of those before me. We, as Christians, are a part of the church everlasting. 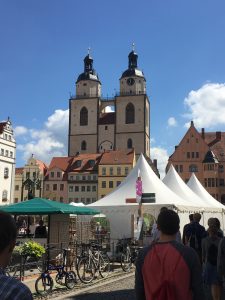 Professor Nielsen told us last year the group of Calvin students doubled the size of the congregation, but this year the church was full. This is, no doubt, because this year is the 500th Anniversary. Acknowledging what has been done here is extraordinary, but something must be taken away from what Luther did. Luther fought for what he thought was right after he was told to be silent. He fought for God even though most were against him outside of Wittenberg. He reformed what could have been thought of as unperformable. Today there are still some fighters for the church. We as church members invite friends and family to church with us because we know the love of God. Churches in the US are doing alright, but in Europe they are struggling to find parishioners. It is saddening to me to see the center of so much Christian thought be a wasteland for faith. God has not forsaken this place because he works all over the world. We can just pray that God will have mercy and grace on those here. A revolution in the population must happen, like Luther’s reformation, though this will be the reformation of congregations.

One final comment on Wittenberg. I am very blessed to be able to visit it at all let alone this year. I am excited for the things that God has planned for my faith this coming year along with other aspects of my life. A little something from my devotion on Tuesday from Luther is the following: “Christ carries all sins, …. and thus they are no longer ours but His, and His righteousness in turn is ours.

1 thought on “The Place of Reformation”