It’s hard to put into words. There really isn’t any proper way of putting it that can sufficiently describe, accurately portray, completely give the depth and entirety of what you see, hear, and feel walking through a concentration camp.

Some time ago, I was doing research on the end of World War II, particularly the Nuremberg Trials. In my research, I came across a file, a digitized version of one of the evidence films used in the prosecution of Nazi war criminals. This particular two-hour film was focused on the concentration camps. The film left nothing out. After a while, the horrors honestly became numbing, but what I never really got used to was watching the live people in the film. Their faces, expressions, body language, was so real. I’d seen pictures of the concentration camps, both during and after their use, but for some reason those pictures feel like from a book, like it belongs in history class and nowhere else. Watching these people come to life in film though- watching them move, talk, and feel -made them so much more real to me.The joy and relief of some women who didn’t have the strength to stand up, but enough strength to smile at their rescuers. The numb shell-shock of some survivors. The slow and horrifying realization of locals who knew something was happening at the “camp” down the road, but didn’t know the extent of the disgusting evils.

Because of this pre-knowledge, actually going to Sachsenhausen Camp was kind of like waking up from a bad dream, only to remember that it was all real. You walk into the main gateway, and wonder how many people walked in before you that didn’t walk out again. You stand in the former extermination center, andwonder how many of the people killed in that room knew what was coming. You wander through the camp, and wonder how many people left the camp, but brought some of it with them inside their heads.

One of the weirdest things was going through there and knowing that some of my ancestors would have ended up here if they hadn’t fled when they did. My great-great-grandparents, a Romanian and a Jew, came to America to escape the oppression they saw coming. Since I carry their blood, I wonder if I, my mom, her mom, and beyond would have ended up in a concentration camp ourselves. It’s weird to realize that someone could look at someone like me and think I was a hinderance to the human race and that I should be exterminated.

The hardest part for me is the helplessness. Over seventy years separate me from these people, there’s nothing I can do to help them. I can’t help them, but what I can do is help those around me today. Along the outermost wall, there were plaques and mini-memorials set up by different countries to honor the lost. One sign had a quote on it, from Martin Niemöller, in German. 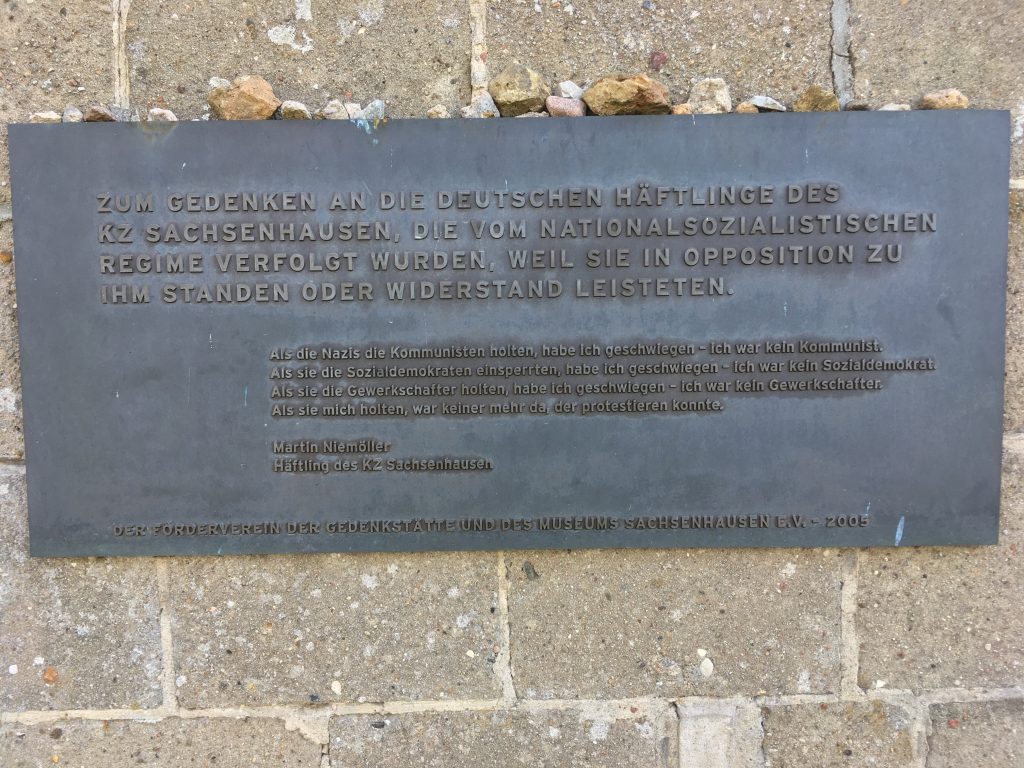 Visiting Sachsenhausen was hard. It hurt to see the blood stains in the concrete floor of the morgue, to read of all the horrible things done there. But it was necessary that I see these things myself. If we fail to understand where we went wrong in the past, we are bound to find ourselves in that same place again, asking ourselves how could we have gotten there again. There is so much to be learned from the Holocaust, but I think the biggest thing I remember from Sachsenhausen is the power of doing. Seeing and noticing other people’s problems is all well and good, but if you do nothing when you should, you are in a worse position than had you failed to notice the people in the first place.

Speak up. Stand up. Do good.