I’ve said it a couple times already, but this trip felt simultaneously as long as a year and as short as a week. We saw so much history and culture, tried so many new things, and met so many interesting people. But, as all things must, our time in Berlin has drawn to a close. As I write this, I’m sitting in a chair flying over the Atlantic on our way home. I am extremely thankful for this opportunity, and I would wish for everyone to be able to do something like this. To not just visit a different culture, but live in it for a little while. To not just read about history in books or watch it in films, but visit it in person. To do something new and unknown to you, until you become comfortable with it.

END_OF_DOCUMENT_TOKEN_TO_BE_REPLACED

It’s hard to put into words. There really isn’t any proper way of putting it that can sufficiently describe, accurately portray, completely give the depth and entirety of what you see, hear, and feel walking through a concentration camp.

Some time ago, I was doing research on the end of World War II, particularly the Nuremberg Trials. In my research, I came across a file, a digitized version of one of the evidence films used in the prosecution of Nazi war criminals. This particular two-hour film was focused on the concentration camps. The film left nothing out. After a while, the horrors honestly became numbing, but what I never really got used to was watching the live people in the film. Their faces, expressions, body language, was so real. I’d seen pictures of the concentration camps, both during and after their use, but for some reason those pictures feel like from a book, like it belongs in history class and nowhere else. Watching these people come to life in film though- watching them move, talk, and feel -made them so much more real to me.The joy and relief of some women who didn’t have the strength to stand up, but enough strength to smile at their rescuers. The numb shell-shock of some survivors. The slow and horrifying realization of locals who knew something was happening at the “camp” down the road, but didn’t know the extent of the disgusting evils.

END_OF_DOCUMENT_TOKEN_TO_BE_REPLACED

I’m going to be straight up with you, Germany has held a lot of surprises for me. Things that I didn’t expect, things that I didn’t know would be here, things that I didn’t even know existed, have all popped up throughout my time here. I arrived here not thinking that I knew everything, but neither was I aware of how many things I was completely unaware of. I like to think that I’ve adapted quickly and managed to readjust how I perceive my current environment, but there’s still so much that I have yet to pick up on. From the way that certain words are pronounced, to the different kinds of foods available, to the ticks and bits of micro-behaviors that differentiate how an American acts from how a German acts, there is a lot that I’m still learning. With that said, High Mass at the Köln Cathedral was quite an experience for me.

END_OF_DOCUMENT_TOKEN_TO_BE_REPLACED

I think one of the memories that sticks out in my mind the most when I look back on this week is our first day here. The weather was great, we were all jet-lagged but ready to go, and there was an entire city out there for us to explore. We dropped our bags off in a room at St. Michael’s-Heim, and then ventured off to the downtown. We arrived at Kurfürstendamm, which as far as I can tell is to Berlin as Michigan Avenue is to Chicago. We grabbed lunch, then began heading east, towards the KDW, a huge department store with an upper floor selling food from all over the world. On our way there, we passed Kaiser Wilhelm Church, 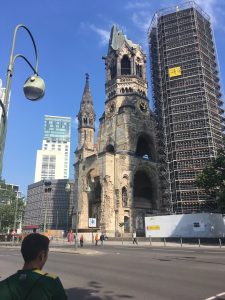 a decently sized building that had sustained damage from bombs during the war, but has since become a memorial to Berlin’s past.

END_OF_DOCUMENT_TOKEN_TO_BE_REPLACED

I remember my first time visiting Calvin College, for the Fridays at Calvin program back in October 2015. My parents and I were scattered about the lunch with the professors, doing reconnaissance on whether this was where I would want to spend the first four years of my post-high school education (spoiler, it was). I happened to sit at the table with Professor De Rooy. He talked with me and my fellow prospective engineering students about a lot of things, from the Engineering program itself, to the careers that graduates tend to get into. One thing I remember talking about in particular, however, was this certain Summer Program in Germany, of which he spoke very highly. It sounded cool and interesting, but I was still kinda overwhelmed from the blast of college life I’d been getting over the previous 24 hours. Still, it stuck with me, and as I talked with more and more Calvin Engineering majors, past and present, I only heard good things about the Summer Program in Germany. Everyone said the same thing, that if I get the chance to go, take it. So, natürlich, when I heard about an upcoming meeting for prospective SPIG students, I made sure to be there. One thing led to another, and now I’m here on my way.