These past 6 weeks have been amazing. I was so excited going into this trip, although a little weary to start school 8 weeks early. But it was definitely worth it. It was so cool to live in another culture for so long, while not being a tourist, which was kind of a strange feeling. END_OF_DOCUMENT_TOKEN_TO_BE_REPLACED

Throughout this trip, we have worshiped in some impressive churches and climbed some very high bell towers. But non of them compared to the Kölner Dom (Cathedral). As we approached the city of Köln by train, it was the one thing that stood out. It towered over the rest of the building and made them look small. The Kölner Dom stands at 157m (515ft), which is absolutely massive

Worshiping in the Cathedral was quite cool experience. We attended Catholic high mass which included burning incense and singing songs I didn’t know the words to. The accustics were great; the organ sounded so full and chilling.

After the service we were able to climb all 533 steps (I didn’t count, there was a sign) of a spiral staircase to a platform at the base of the spire 100m (330ft) high. The view from the top was amazing, because you could see the whole city. The details at the top of the cathedral were simply mesmerizing. It looked like there was so much thought put in to every statue and design. The cathedral was completed in 1880, when we had at least mostly modern construction methods, but it was hard to imagine how they planned on completing this giant when work began in 1248.

The Kölner Dom has been my favorite cathedral that I have visited.

I am having so much fun in Germany. Here are a few pictures from our adventures. 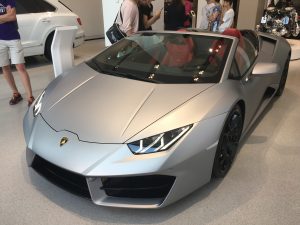 There are way more nice cars in Berlin than back in Grand Rapids. Pretty much wherever we have been in berlin, there are always fancy cars. There are Porches, Lamborghinis, Teslas, and so much more. This is a Lamborghini from the Volkswagen museum. We were not allowed to sit in it, but it was still very cool. Made me wish Id have enough money to afford one someday. 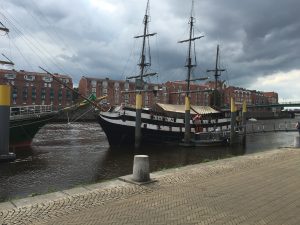 This picture is from our singe day trip to Bremen. It is an old ship that was converted into a restaurant. It would be cool to eat there, but we did not get the chance. The funny thing about this boat is that there are bridges on each side that are too low for the boat to pass through, so its kind of stuck there. 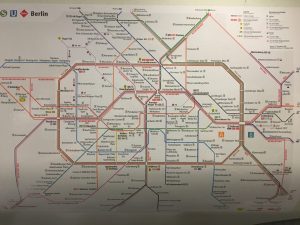 Here is a map of the U-Bahn and S-Bahn routes though the city of berlin. We use these methods of public transport pretty much wherever we go besides school. These subways get you around the city pretty quick, if you know what you’re doing… which now I finally do. There were many times at the start of the trip where we were not sure which train to take and ended up going the wrong direction. Public transport can be fun as long as it is not crowded.

When we were in school, we all learned about the horrible events that occurred during the Holocaust. We learned of Hitler and his hatred for Jews. We learned that millions of innocent people were slaughtered for no good reason.

But these are Just facts.

To fully (or at most partially) understand the events that took place during that period means taking a visit to one of the locations where it all happened. END_OF_DOCUMENT_TOKEN_TO_BE_REPLACED

Wow, I have been in Germany for 6 days now! It already feels like forever. Getting used to a new culture has been quite the adventure, and sometimes just a little bit overwhelming. From the moment that we got off the plane, and I couldn’t understand much that people were saying, I knew this would be an interesting trip. Occasionally you meet a person that speaks some English, but most of the time that is not the case. It was really helpful taking a German class last spring, because I am able to say basic phrases that get my point across. Of course if I don’t know what to say, I can always just switch to hand motions.