Today was a big travel day for the group.  We left Paris early in the morning and traveled to the city of Reims.  Our goal was to worship in the Reims cathedral and see where the kings of France had been crowned through the centuries.  The service was a Catholic Church service, was all in French, and was held in the cathedral with a temperature close to freezing.  When we sang, we could see our breath!

After finding lunch in Reims, we traveled on the the country of Luxembourg to visit the American military cemetery from WWII.  This is the place where General Patton is buried.  Jennifer was our guide in the cemetery and told us about the cemetery and stories of several people that were buried there.  At the end of our visit, our group was granted the privilege of bringing down the US flag and folding it up for the night.  That was very special.

From there, we traveled into Germany and stopped at the border city of Trier, known as one of the earliest Roman settlements in the region.  An ancient Roman gate still stands today and we visited it after we checked into the hotel and ate a delicious Italian dinner.

Everything here was huge. Originally a hunting lodge for King Louis XIII, it was then enlarged into a palace through various expansions beginning with expansion by Louis XIV. In the palace everything was extravagant and over the top. The Hall of Mirrors showcased the first ever mirrors in France which were constructed by artisans from Venice. Sitting at over 700,000 square feet, its size was astonishing. All of the material for the palace was sourced from France in an attempt to minimize costs. However, it didn’t help all that much as estimates on the total cost of construction is in the billions.

The gardens cover over three square miles and contain hundreds of fountains and water jets as well as 200,000 trees. Each year, over 200,000 flowers are planted. The grounds once contained over 1000 fountains and it’s a work in progress on restoration of both fountains and rooms in the palace.

This was one of my favorite places we’ve visited so far and I’d love to go back again, especially in the spring time to see the garden in full bloom.

We toured the Eiffel Tower as well as the Catacombs on day 7. Two of Paris’ most common tourist locations, these attractions were impressive and very intriguing.
We had the opportunity to go to the summit level of the Eiffel Tower. However, the weather limited our view as we were 281m up into fog. The height along with the structural design of the tower was staggering.
Next, we walked to the catacombs. It was quite a change in elevation to switch from nearly a thousand feet up to over sixty feet below ground. The catacombs museum was only a portion of the entire catacombs area, which covers only one eight-hundredth of the tunnels under Paris. The eerie nature of the catacombs was not as bad as I had imagined, as it was well lit. In total, the catacombs contain the remains of over six million people.
A day filled with site-seeing, we were privileged to be able to experience these locations.

We’ve now been in Europe for over a week! Time has flown by. We’d like to recap a few things we saw in the Netherlands because we haven’t posted about them yet.

Back when we were in the Netherlands, we visited a few storm barriers. While in southwest Holland, near Hoek van Holland, we saw the Maeslant barrier (part of the vast Delta Works dike system). In the event of a flood, this barrier protects the important trading city of Rotterdam. We learned many interesting facts about this structure from a guide: it was completed in 1997, it operates with ball-and-socket joints (each of which is 10 meters in diameter and weights 680 tons), the doors close automatically, and each door is as long as the Eiffel Tower is tall. Now that we’ve been up the Eiffel Tower, we have a better idea of the scale of this barrier. Below is a picture of a section of the wall. 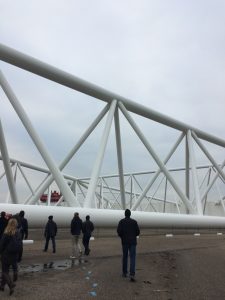 We also saw some windmills in the Netherlands but didn’t get a closer look at them until we got to Brugge, Belgium. Windmills are generally considered Dutch even though the Dutch were not the ones to invent the technology. They were used to pump water out of lowlands back into rivers for farming purposes since the Netherlands is so much below sea level. They were also depicted in art quite often.

Our bus driver, Joop, gave us some information about the numbers of windmills as we were driving from the airport to the hotel in Amsterdam. He told us that there used to be around 8000 windmills in the Netherlands, but there are now only about 800. The city keeps building around them so that the wind cannot get at them as well anymore.

Although we did not go see any windmills in Amsterdam, some us went to see two old-fashioned windmills located on the outskirts of Brugge. The blades of the old ones are much different than the new windmill’s blades. They have an open, netting type of material on half of the blade as opposed to the solid blades of the modern ones, and the supporting structure looked a bit like a barn. Below is a picture of one of the old-fashioned windmills we saw in Brugge. 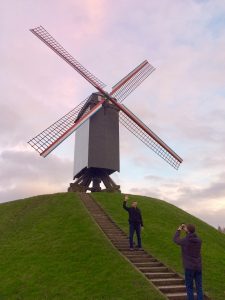 Brugge was a really cool city in my opinion. It has a medieval feel to it because all of the buildings are old and are made of brick. The reason that they are made of brick is because of all the clay that is in the ground. It didn’t seem like a very touristy city which I liked because I felt like I was able to experience the culture a bit more. The city square had a lot of shops that stemmed off of it. There were too many chocolate shops to count because Belgium is famous for its chocolate. It was remarkable to me that everyone was still riding bikes and out and about even when it was below 30. This made the town have a very happy and excited vibe because there was a lot of energy in the city. I was able to rent a tandem bike on of the nights in the city and ride around looking at all the different architecture as well as seeing the outside of the city. Overall I thoroughly enjoyed Brugge and I hope someday I can go back.