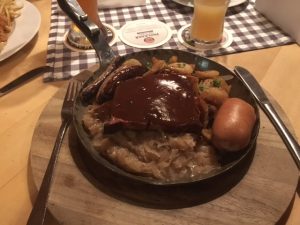 The food here is amazing. “Bayerisches Schmankerl,” a Bavarian dish, was offered at a traditional German restaurant. Notice how it was served on a wood plate or platter. It included a kind of Bavarian meatloaf that does not taste at all like American meat loaf, 3 Numberg-style sausages and one regensburg-style sausage. The Numberg-style sausages have a lot of flavor as they are typically spiced with ginger, nutmeg, chilies and cloves. What is interesting about the Regensburg sausages is that supposedly they are made like a restaurant in Regensburg, Germany makes them that has been open since around 1135 AD. I don’t know if this is really true, but it is an interesting possibility. The meal also included fried potato slices, and sauerkraut in the front. This has so far been my favorite meal here. 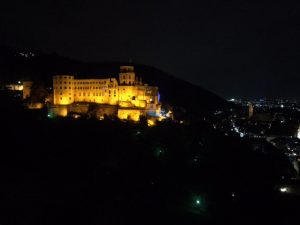 This is the Heidelburg Schloss. It was built around 1400 and is one of the best examples of a Renaissance castle in Germany. This was one of my favorite places we have visited. It’s an amazing building. Our group visited the castle in the morning and afternoon and were able to tour the whole place. After the official tour was over, Andrew and I were so fascinated by this complex we decided to take extra time and explore everywhere possible on the castle grounds. In doing so we found the vantage point where this photo was taken during the day. After dinner a group of us went up to the castle at night and walked around its grounds.

This is the Berlin wall. As many know the wall came down in 1989 with much celebration as families and friends separated by this wall were reunited. It is also a symbol for many Germans around the world of great sadness and suffering. The woman who helps care care for my grandmother told of her grandmother being shot as she tried to run through as it was being built. She died there, but they guards did allow the children she was holding to run through and be raised in the freedom of West Germany, but there were many in her family that stayed in the East. This section of the standing wall is near Checkpoint Charlie, the infamous place where people could cross from East Germany into West Germany. Many people died trying to get across the border here. I took this photo because it I could imagine someone trapped on the East side peering through and wondering what was on the other side, wishing to go there but unable to do walk the few feet to get there. There is another section of the wall about a mile from where this photo was taken that was not knocked down which now is covered with painted murals on one side.