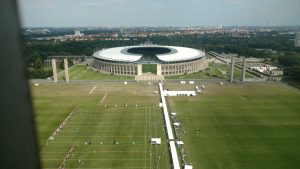 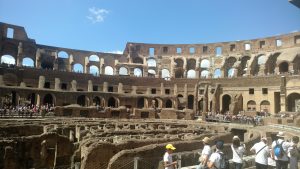 With our German class, we visited the Olympic stadium built by Hitler’s regime for the 1936 Olympics in Berlin. Hitler’s goal was to build a great stadium for propaganda purposes, one so great that it would last longer than the Coliseum in Rome. I had the privilege to travel to Rome one weekend with my friend Clay and see the Coliseum in person. The Coliseum was built in the area where the roman emperor Nero had the Domus Aurea built: an artificial lake surrounded by pavilions and gardens. Nero snatched up much of the land after the Great Fire of Rome in order to do this, so when his Domus Aurea was torn down for a pubic amphitheater to be constructed, it was received as a populist movement to return the land to the people. However, the construction was funded by the spoils taken from the Jewish Revolt in 70 AD and built by many of the 100,000 Jews brought back to Rome as slaves. I found this to be an incredible parallel: two monumental complexes built to please and fool the people, in the midst of the persecution of another group. It seems that when we as humans and nations always want to be remembered, even at the expense of someone else. 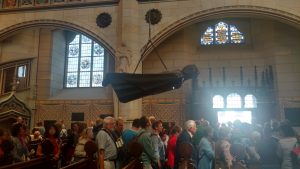 The third picture is a photo taken in the church that originally held Martin Luther’s 95 theses on its entrance. There was a statue hung from the ceiling displaying what appeared to be Luther taking flight. It seemed like an odd place and position for Luther to be remembered, but I figure on the 500th anniversary of the Reformation, just about anything goes.