Throughout this trip, we have worshiped in some impressive churches and climbed some very high bell towers. But non of them compared to the Kölner Dom (Cathedral). As we approached the city of Köln by train, it was the one thing that stood out. It towered over the rest of the building and made them look small. The Kölner Dom stands at 157m (515ft), which is absolutely massive

Worshiping in the Cathedral was quite cool experience. We attended Catholic high mass which included burning incense and singing songs I didn’t know the words to. The accustics were great; the organ sounded so full and chilling.

After the service we were able to climb all 533 steps (I didn’t count, there was a sign) of a spiral staircase to a platform at the base of the spire 100m (330ft) high. The view from the top was amazing, because you could see the whole city. The details at the top of the cathedral were simply mesmerizing. It looked like there was so much thought put in to every statue and design. The cathedral was completed in 1880, when we had at least mostly modern construction methods, but it was hard to imagine how they planned on completing this giant when work began in 1248.

The Kölner Dom has been my favorite cathedral that I have visited.

The Kölner Dom was absolutely magnificent. It was the very first thing you could see as you walked out of the train station in Köln and you couldn’t miss it. It rose far above any other surrounding buildings with its twin spires stretching over 150 meters tall. During our entire stay, it never got old just looking up at it. Going to the top, as you can imagine, was an incredible view itself in addition to the ornate carvings over every piece of stone all the way to the top. END_OF_DOCUMENT_TOKEN_TO_BE_REPLACED

I’m going to be straight up with you, Germany has held a lot of surprises for me. Things that I didn’t expect, things that I didn’t know would be here, things that I didn’t even know existed, have all popped up throughout my time here. I arrived here not thinking that I knew everything, but neither was I aware of how many things I was completely unaware of. I like to think that I’ve adapted quickly and managed to readjust how I perceive my current environment, but there’s still so much that I have yet to pick up on. From the way that certain words are pronounced, to the different kinds of foods available, to the ticks and bits of micro-behaviors that differentiate how an American acts from how a German acts, there is a lot that I’m still learning. With that said, High Mass at the Köln Cathedral was quite an experience for me.

END_OF_DOCUMENT_TOKEN_TO_BE_REPLACED

The highlight of our trip to Cologne was the Cathedral. We visited the Cathedral twice, once as tourists and once to worship. Attending High Mass at the Cologne Cathedral was my first time attending a Catholic service and there were some similarities that I noticed with Protestant services. END_OF_DOCUMENT_TOKEN_TO_BE_REPLACED

It’s no wonder to me that there are warnings to watch out for pickpockets at the Köln train station. Because the very moment you walk out of the station, the beautifully monstrous cathedral is there staring you down. I lost just about all sense of self and situational awareness upon seeing the cathedral because it was simply that stunning. Not only did we see this amazing stunning structure, but we also attended high mass there that Sunday. END_OF_DOCUMENT_TOKEN_TO_BE_REPLACED

I really enjoyed worshipping in the Köln Cathedral. The organ playing was incredible. I could not believe how beautiful it sounded! I loved listening to the music throughout the service. I also enjoyed the choral singing, both the choir’s singing and singing with the congregation. END_OF_DOCUMENT_TOKEN_TO_BE_REPLACED

As you have probably figured out by now, our group visited three cities this past weekend: Heidelberg, Koblenz, and Cologne. It was such a great weekend, filled with laughs, sights, and explorations. One of the highlights of the excursion was worshipping on Sunday morning in the Cologne Cathedral. The congregation was sizeable, and the organ sent chills down my spine.

END_OF_DOCUMENT_TOKEN_TO_BE_REPLACED

The Köln Cathedral is a jaw-dropping place, which is precisely why I would never attend services there regularly. At High Mass in the Köln Cathedral, there are tourists swarming the entire building. Throughout the entire service, I felt as if we were animals in a zoo because of all the eyes watching our every move. END_OF_DOCUMENT_TOKEN_TO_BE_REPLACED

If I had to sum up my worship experience at high mass in the Köln Cathedral, I would choose fascinating. This was the first catholic mass I have attended and it certainly was an interesting first experience. This cathedral is the complete opposite from the church I attend back home, but I enjoyed every minute I spent sitting under the towering ceilings and listing to the organ amplify throughout the massive sanctuary. END_OF_DOCUMENT_TOKEN_TO_BE_REPLACED 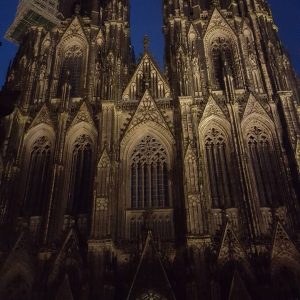 One often does not think of a building as awe-inspiring; however, the Cologne Cathedral can change that in a second. I had seen pictures of the Cologne Cathedral and knew of its sheer size and beauty, but as I came out of the train station and looked upon the church’s spires hundreds of feet in the air, I couldn’t help but have my jaw drop.