Germany is a country world renown for it’s beer, so I encourage anyone who is here and of legal age to give it a shot. Beer is heavily ingrained in the culture here, and frequenting something like a beer-garden is a cultural norm.

But for those who insist on staying alcohol free, or want a break from it, I have compiled a list of beverages that contain no alcohol (<0.5% legally) and my review of them.

For the most part soft drinks (soda vs pop, has been a heated quarrel between students here) are the same here in Germany/Europe as in the states. The main differences being portion size, the use of sugar instead of corn syrup, and Fanta. 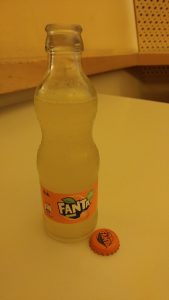 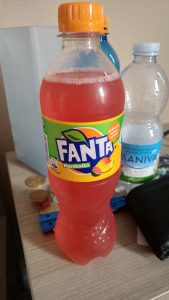 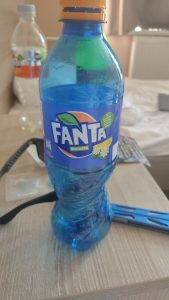 A notable difference in German Fantas is the use of real oranges. This causes the beverage to have a flavor similar to an orange San Pellegrino. Many students compare it to Sunny D, but carbonated. When I traveled to the Czech Republic for my free week, I found a whole host of different Fanta choices. One of my favorites, has to have been a white grape inspired soda that closely mimicked sparkling grape drinks, such as the ones sold by Welch’s or Martinelli’s in the states. Overall, I would highly recommend trying, at the very least, the Orange Fanta in Germany. The same style of Orange Fanta can also be found in parts of Canada like Montreal, Quebec if you don’t want to leave North America to try it. 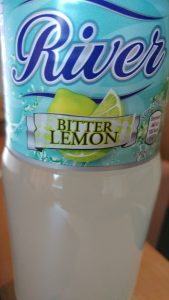 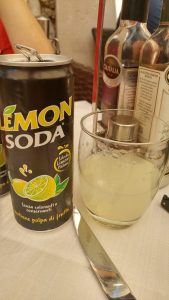 Bitter lemon and lemon soda are two very different takes on a sort of carbonated lemonade. Bitter lemon is more common in Germany and lemon soda I found to be prevalent in Italy. Pretty obviously by the name ‘bitter’ lemon is far more bitter and often has the taste of lemon rind in it, and lemon soda is a nice balance between sweet and sour making it far more pleasant to drink straight. 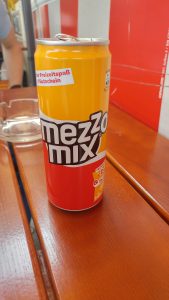 Mezzo Mix is somewhat of an oddity in the German region. It’s marketed by the Coca-Cola company and is made from their Classic Coke mixed with some orange flavorings. I was told by a local German bratwurst seller to ask for a Spezi at a bar if ever I wanted the original inspiration for Mezzo Mix that he claimed tastes much better. A Spezi is a direct combination of Classic Coke and Orange Fanta, while Mezzo Mix is premixed with what I assume is artificial orange flavoring. I personally found Mezzo Mix to be too complicated, like mixing all the drinks at a soda fountain, you get hints of the different flavors but overall they dull each other out. It starts off with a dampened Cola taste and ends with a weak orange aftertaste when consumed. It leaves me expecting something more and encouraging me to just get a normal Coke or Fanta next time.

Yeah, this is just carbonated apple juice, I’m not gonna bother breaking it up into different brands. It’s ‘ight, I find that carbonation tends to make things more bitter, so I prefer my juice without it.

Water is the building block for life, how could it possible change from country to country? Well, it’s the stuff put into the water that changes it, mainly carbonation, but also other chemicals that may or may not turn the frogs gay.

Mineral Water: Carbonated vs. not

Carbonated water is very popular in Europe. Just about every restaurant will offer you water with or without gas when you purchase it. Yes, you read that right, you have to purchase water everywhere you go and it’s not cheap. When it comes to water with gas versus without, I think it’s safer to go without. I find that water with gas can be nice if distributed in a glass bottle, but cheap stuff from a grocery store in plastic bottles is straight nasty. It tastes like pool water right after a YMCA’s swimming lesson to six year olds with uncontrollable bladders takes place. It’s putrid. Glass bottled or higher end companies alternatively can be tolerable and sometimes enjoyable. They forgo the chemical taste and leave you with only a natural mineral impression and a few bubbles. 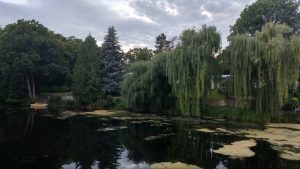 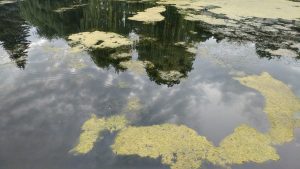 While I do not recommend drinking water from random lakes you know nothing about, I went swimming a few times and things happen. So here is my review of German lake water. It is by far the best lake water I have ever tasted. It is so sweet, not a soda or fruit juice sweetness, but the sweetness you learn to enjoy in unsweetened teas made with berries or fruit remnants. I swam in two different lakes, and I noticed this quality more prominently in the lake near where we stayed (Saint Micheal’s Heim). This was the popular watering hole for Calvin students and locals alike. The other lake was not as mind-blowing taste wise from what I can remember hence the 9.5 and not 10 rating.

There is a substantial market for alcohol free beer in Germany. They are usually advertised a “sports drinks”, presumably because you can drink them all day while you bike, play with your friends in the pool, or even drive. For the most part they don’t taste great, some aren’t bad, but with the exception of a Raddler style they can be hard to enjoy. I wish I could have tried more brands because there are quite a few, each major brewery has it’s own non-alcoholic variant. 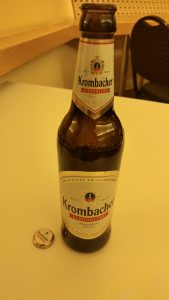 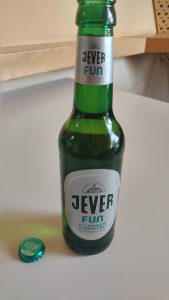 I tend to judge alkoholfrei beers (Pils or other) by how “tooth pasty” they taste. I’m not talking about the refreshing mint flavor, I’m talking about the fluoride and sodium laureth sulfate taste. Sodium laureth sulfate is responsible for the foaming in toothpaste, but also the suppression of sweet taste buds. Try drinking orange juice after brushing, it’s pretty gross. I found Pills to have this taste in abundance, and since I am not a fan of it I rated accordingly. Interestingly, the Jever brand had, along with a tooth pasty taste, a different aroma and taste that made it worse. “It smells like weed”  (Alec Twining), and that it did, like a swamp full of skunk cabbage after hitting it with a weed wacker. The second I cracked it open and took a whiff, I regretted it. God knows what herbs they put in that thing, but it only made a bottle of tooth paste taste worse. 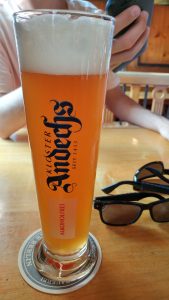 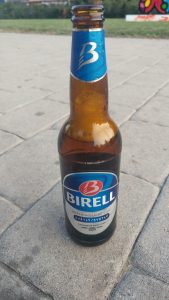 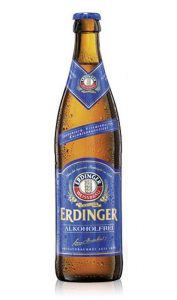 The regular beer substitutes have a far less tooth pasty taste, which is good. Some aren’t that bad, the Andechs Wheat Beer was pleasant like a barley tea, possibly because it was the coldest beer I had in Germany. Like their water, I don’t think Germans like their beer ice cold. The Andechs I got at an American styled BBQ and brewery where water was served with ice in a pitcher… how strange. Overall, some alcohol free beers can be a nice change from water, especially if your water has been through a YMCA pool. 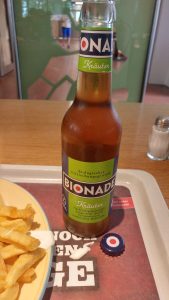 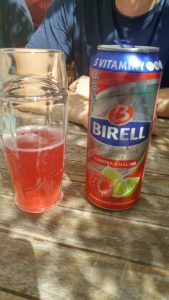 Raddlers are traditionally a drink made from beer (alcoholic) and a soda like Fanta or Sprite. The non-alcoholic counterpart is usually beer (alkoholfrei) mixed with a juice.  These Raddler style drinks are actually pretty good, probably because the juice masks the tooth paste taste. If you want something enjoyable with a little beer taste in it, go with these.

I’m interested to try some non-alcoholic beer in America to see who does it better. As far as I can tell, beer without the depressant in it is viewed as pointless and disgusting in the states. This might mean even crappier beverages that no one is interested in refining. As for Germany, you may get some funny looks or playful insults when ordering something without alcohol at night, but no one will crucify you. Again, I encourage anyone of drinking age to try some real German culture and crack open the real deal if you’re ever in Deutschland.