I had a very interesting time in Paris. It was rather frightening initially because of the language barrier. I happily found out that the Parisians readily speak English after saying “Parlez-vous Anglais?”. Thankfully, that was overcome. It was a cultural experience being in Paris because I really did not know what to expect. Everybody was fairly nice, and I did not feel as though they were angry with me, unless I was being slow in the Metro. There is a sense of a laidback culture with the many restaurants not pushing you out the door. We were able to relax and take time. This was nice. At one creperie, we we got unexpected free water. Being in Europe, that doesn’t happen often. I was a little nervous that they were going to charge us, but they didn’t. The food was excellent at this Creperie. I have a feeling that there may be some cultural aspects on water working its way to Europe from America.

Before entering the Louvre later in Paris, a group of tourists were being quite loud. It wasn’t our group, but I was thinking to myself that they shouldn’t be shouting. To my surprise shortly later, there was what I believe to be a French man telling them to quiet down. In this way, I am at least similar to the French about not making a huge scene and remaining relatively quiet in conversation. Though I’m not sure I would tell a group of tourists to quiet down, but that’s probably the “satisfy all” American in me. I haven’t found deep cultural differences yet.

Worshipping in a cathedral is always very cool. This church was literally cool as it was about 40 degrees Fahrenheit inside. Furthermore, as opposed to churches in the United States there is always a sense of majesty of God. It always amazes me that these buildings were built, and to me it shows the reverence of God’s power and grace. I know anywhere there is a gathering of more than one in the name of Christ, it is a gathering with Christ, as it says in Matthew, so there isn’t a huge need for cathedrals.

In any case, today’s worship was interesting. I have been to Catholic mass before, but it was either in German, English, or Latin. Since we worshipped in Reims, France, the service was obviously in French. It was not easy to follow along, but I felt I could still worship because God is not in any one language. Even if you do not understand the language of the worship, you can get the physical cues from other worshippers and still have a reverence for worship. I noticed that a few worshippers were very reverent in their worship by the way they knelt and bowed, with their face nearly touching the floor, to confess their unworthiness and sinfulness. I had never really seen this before in a worship service. Most often in my experience people just follow and don’t act according to what they feel. They may feel that the way they pray is enough. This worshipper I saw believed something else about God. God probably does not differentiate one prayer stance from another, but one’s heart must be in the right place. That is a place of trusting in the Lord. Though there was a language barrier, we were worshipping fully with our hearts. We were being intentional in the praising of our God with thanksgiving for what he has allowed us to experience. We have discovered something new about worship. This experience helped me specifically to remind myself that worship is about God. It isn’t about what you get out of worshipping, though there can be saving grace out of communion. Rather, worship is about giving praise to God for all his great works in us, for His blessings to us, and for promising eternal life with Him for us. Without God we are condemned, so it is right to give Him thanks and praise in all languages and ways.

The two images below are from the Reims Cathedral. 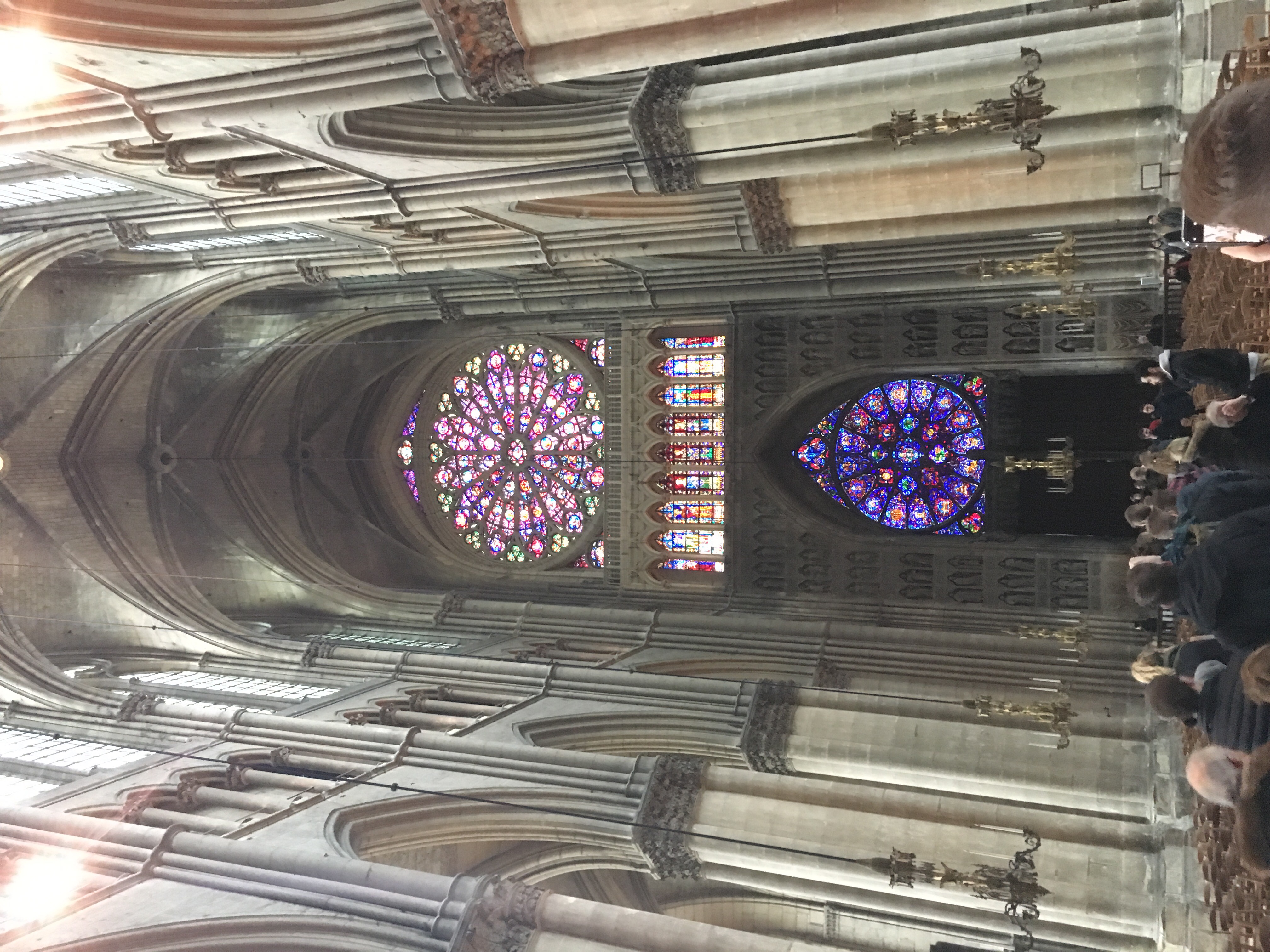 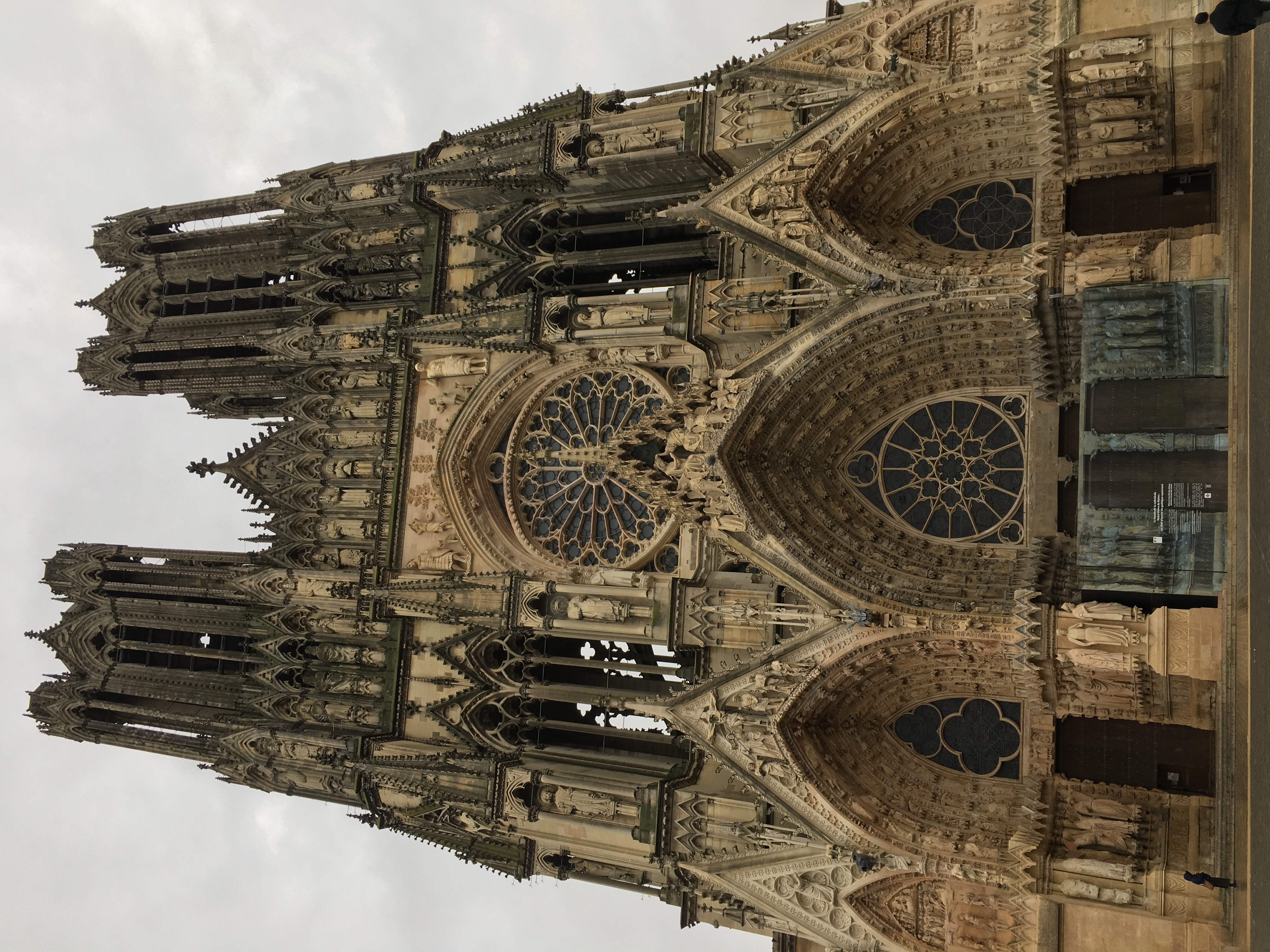 2 thoughts on “French Cultural Reflections and Worship in Reims”